Good afternoon, I have a special exhibition. Since many blogs have been wishing Irish author, Bram Stoker a happy birthday on November 8th, I have decided to contiue with that theme.

On this day, Friday the 13th, 1992, the movie "Bram Stoker's Dracula" was released (or some could say unleashed) into theaters. It was this movie that made me a fan of character actor, Gary Oldman. But on to the exhibit, "Dracula : The Complete Vampire" published by Starlog Movie magazines in 1992, which was out about the same time as the Dracula movie. 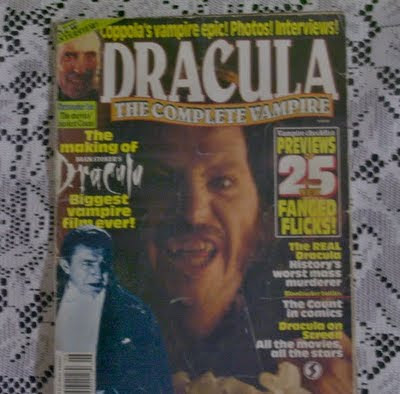 This magazine covers the history of Dracula movies from the 1920's (Nosferatu) up until the release of "Bram Stoker's Dracula". It also includes how Bram Stoker came to write the novel, "Dracula"and included the story of Vlad The Impaler.
Posted by Mark Hille at 4:08 PM No comments: