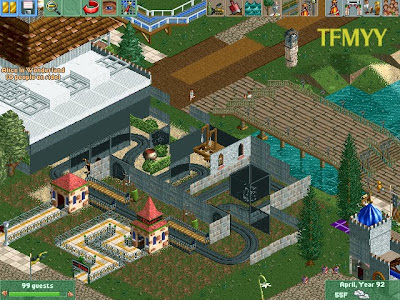 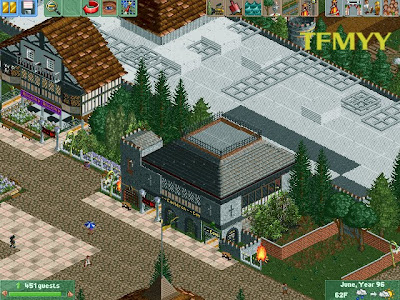 Welcome to another RollerCoaster Tycoon 2 post. I have many screencaps from my RCT 2 Magic Kingdom sims. Today's post is a ride that was planned but never built. ( I just found that out in October). But this was done before I read about it on the web. This screenshot is my version of "The Black Cauldron" inside and out. Though my facade could use work. :) I would guess this ride would be effects heavy with projections and other illusions. The Disney version of "The Black Cauldron" was based on "The Chronicles of Prydain" by Lloyd Alexander. More info on the books can be found on this Wikipedia entry. Other never built rides and attractions can be found here.

(RollerCoasterTycoon is Atari, Magic Kingdom is Disney)
Posted by Mark Hille at 1:47 PM