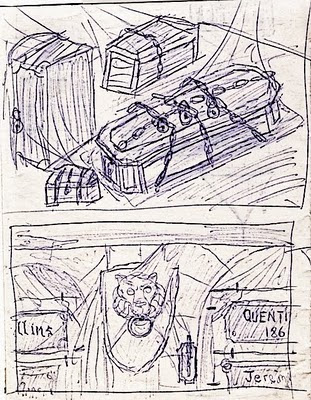 Tonight is the 20th anniversary of the short lived Dark Shadows revival. It was pure 90's... with fog and vampires that had big hair. A couple of years ago I could not get enough of it. But video was hard to come by, until Hulu and YouTube started showing it. It was also shown on Chiller, that horror/suspense channel. But back to '91... at the time I had not seen the original Dark Shadows, so this was all new to me. After the first half of the pilot was shown, I was hooked... I watched every episode( if it was not postponed by the news ). I started coming up with my own ideas for episodes after it went into hiatus, then cancelled. The cast was good, made me a fan of Ben Cross and especially the charming Joanna Going (look her up.. she's done alot.. movies.. TV..) It also featured a pre Highlander Adrian Paul.   Roy Thinnes made a good villian as Reverend Trask  in a time travel story (like Jerry Lacey in the original 1966-71 series.. good acting). Watching reruns made me a fan of Julianna McCarthy and Stephan Gierasch. Watching the original 1966-1971 version put the revival in perspective. Too bad the 1991 version was cancelled. Some might find it over the top, but it was made for prime time in the 1990's.

Wikipedia has an entry here
and a news blog.


These links are the official Facebook pages of some of the Dark Shadows Revival actors.

Joseph Gordon-Levitt
Posted by Mark Hille at 8:00 PM No comments:

As people can see, I have not posted since December. Modem difficulties and fatigue have contributed to this abscence. But fear not..... I have some good post Ideas coming. Maybe I will even do reader submissions. Should I do more of what I have dubbed " Rollercoaster Tycoon 2 Disney Park Showcase"? How about special day anniversaries? More old magazine covers?
More drawings?

Let me know in the comments.
Posted by Mark Hille at 8:09 PM No comments: