Holy Magazine Collection!!!: Make It So 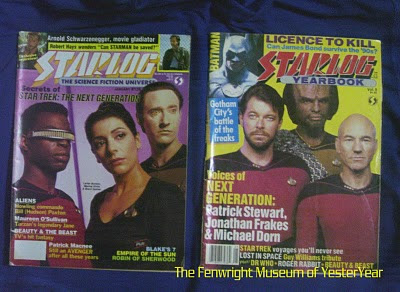 Today, September 28, 1987 was the debut of Star Trek: The Next Generation. The two hour pilot was "Encounter at Farpoint". I never saw that episode on the first run. In my opinion the first seasons seemed awkward and forced. I learned today was the debut from Memory Alpha, the Star Trek Wiki. Another great site is Ex Astris Scientia. I have many more Starlog covers from 1982- 1995. That could be a regular feature.